Three years since visiting and reviewing Sel Et Poivre, I was invited back to taste some new and varied offerings on the restaurant’s traditional French menu.  The restaurant was busy and lively as ever with a surprisingly packed dining room for a chilly winter Tuesday night.

For the rest of February and well into March, Chef Christian will be serving a variety of rarer meats as part of the restaurant’s annual game festival. In addition to classic French fare like duck, steak, and veal kidneys, you can expect wilder visitors such as venison, quail, and even antelope!

The meal started with two game sausages: one made of pure venison and the other a mix of venison and wild boar with cheese and jalapeno peppers ground in for extra flavor. I had never tasted venison before, but had heard that it can taste quite gamey when not hunted or prepared properly. Gamey flavor, often described as musky or pungent, and tougher texture come from meat being left out for a time after hunting.

The venison sausage I tasted was salty and filling with flavors that reminded me a bit of spiced lamb though the texture was a little bit firmer. The wild boar variant was both peppery and a little sweet with a mouth feel that felt lighter and more traditional for sausage.  I would not call myself a game enthusiast quite yet, but I found the pure venison sausage to be pleasant and different in an earthy way. 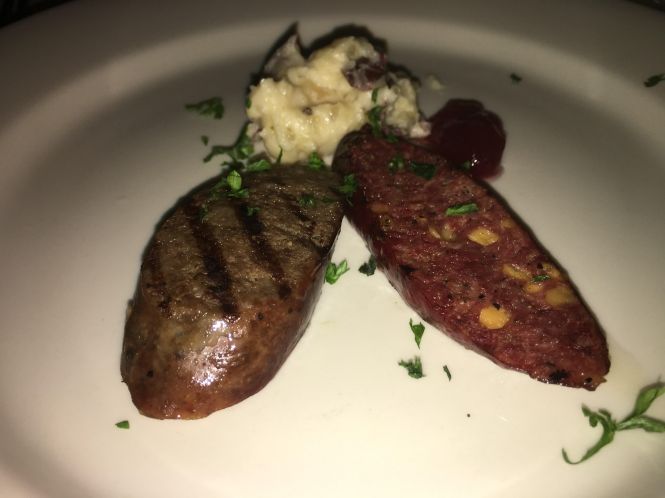 Next I tried the escargot, which was slathered in garlic butter and parsley, a classic combination. It was a delightful appetizer bursting with succulent juiciness, savory flavor, and a light spring breeze of herbs. The texture of the snails was melt-in-your-mouth rather than chewy–delicate enough to make me forget what I was slurping!

The third course was both the simplest yet the most enthralling for me: a creamy red pepper bisque. With a kiss of cream and a dollop of potato, the dish had a wonderfully viscous texture whilst still remaining relatively light and frothy. I cannot stress enough that I really dislike bell peppers, but I adored this soup. The dish carried the full-bodied summer aroma and sweetness of the pepper, but bolstered and grounded it with a rich swirl of cream and salty potato. I’m sure Chef Christian could work wonders with any vegetable, but this seasonal bisque special was a total treat for me. 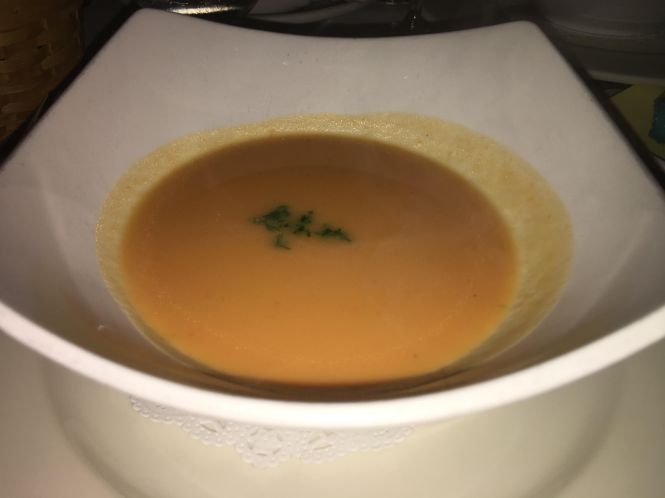 The first main course we tried was cod served on a bed of lentils. Despite an intense aroma of fish stock around the dish, I found the fish flaky, light, and just right in terms of saltiness. Covered in cream and garnished with little peppery punches of mustard seed, the lentils made for a strong and filling contrast as a side. 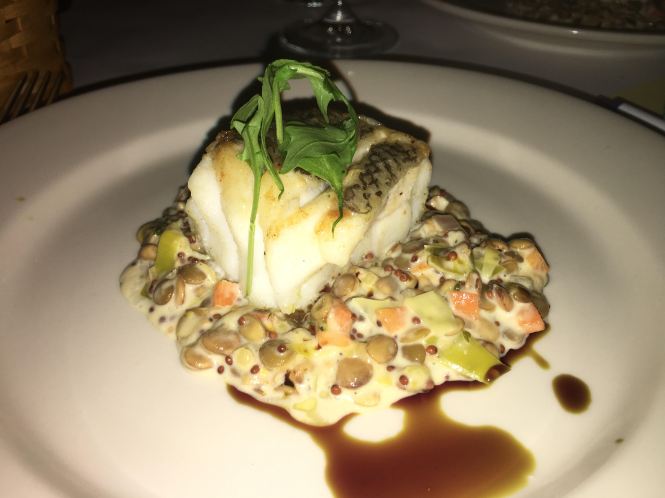 The second main course we enjoyed was quail stuffed with goat cheese in a port wine sauce. The quail was delicate with crispy,  seared skin and savory meat without a trace of gamey flavor.  Quail is a bonier, smaller bird than chicken with more delicate morsels of meet. The sweet, slightly acidic sauce mingled beautifully with the billows of melted, salty-tangy goat cheese nestled within. It was served with wild rice and pureed sweet potato that balanced out the decadence nicely.  I’m told you get a pair of quail to gobble down when ordering off of the regular menu!

We began dessert with the smoothest creme brulee I’ve ever tasted. It was garnished with a perfectly ripe raspberry. I only wish it had been topped with more.

Following that was an incredibly fluffy apricot crepe with a scoop of vanilla ice cream. Chef Christian attributed the meticulous, eggy delicateness of the crepe’s thin layers to a simple flick of his wrist. The apricots were warm and spiced, melted down to a heavy syrup that had been expertly drizzled over the crepe to impart their flavor without leaving it soggy. It was a dazzling yet wonderfully understated dessert.

My second visit to Sel Et Poivre was a forest full of flavor. Between the game animals and artful arrangement of fruit and vegetable flavors, at times I felt like I was enjoying courses from the king’s last hunt at a medieval court feast.

Brunch is 12 PM-4 PM on Saturdays and Sundays.

A Pitiful Preface Regarding my Lack of Nourishment

From cleaner air to a lack of sales tax (hello two new pairs of shoes), my visit to Oregon gave me plenty to enjoy. However, these pleasures were almost lost on me because of how hungry I felt my first night there.

I hadn’t eaten anything on the five hour plane flight except for some grapes that probably cost like $10. Delta was only offering two freeze-dried looking sandwiches for like $10 a pop, so I passed on my inflight meal.

Landing in Portland at roughly 8:30 PM, I thought I’d given myself plenty of time to scurry for dinner, but by the time I’d made it to my Salem hotel and settled in, I realized that attempting to find a restaurant after 10 PM without a car would prove nigh-impossible. New York had certainly left me spoiled in the late night bites department!

Going to bed on a virtually empty stomach, the piercingly brilliant western sun easily woke me at exactly 6 AM. After taking longer than I probably should have to figure out the hotel wifi, I consulted Yelp, TripAdvisor, and several other similar programs all directed me to the same restaurant: Word of Mouth Bistro. I was lucky that it was only a brisk twenty minute walk from the Howard Johnson’s. 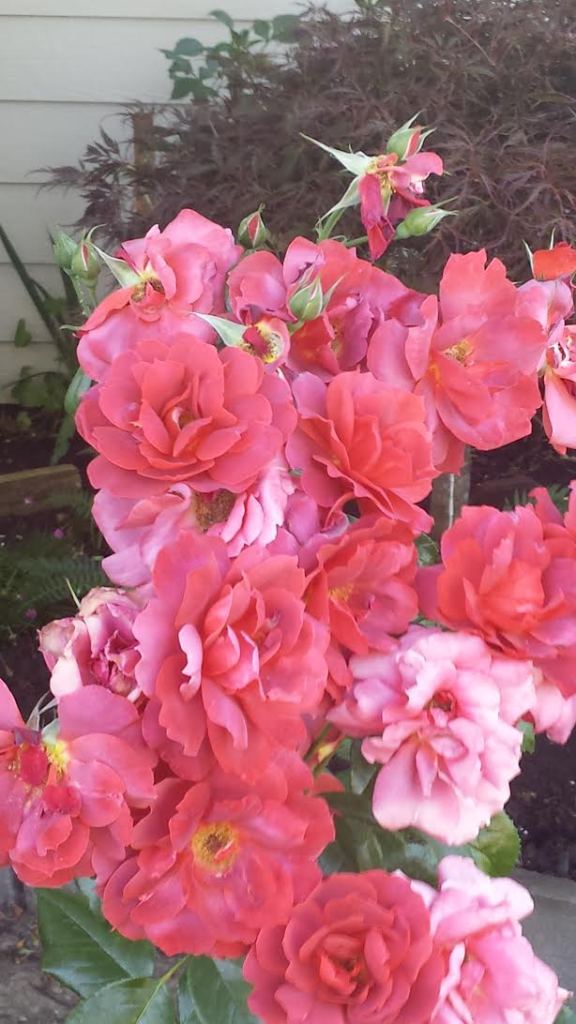 I did stop to smell the roses more than once. Oregon has A LOT of Roses 🙂

Arriving shortly after 7 (it was easy to spot the cozy-looking house beneath the big sign), I immediately found several groups of people queued up to dine–a good omen! I was seated after maybe 10 minutes and eagerly perused the menu.

I learned that the owners Becky and Steve have spent years honing their skills in comfort cooking and that they do all of it themselves rather than trust any other chefs with their beloved recipes. Torn between the Chicken Fried Fillet Mignon and the Plate of Love which consists of Prime Rib Hash and Creme Brûlée French Toast, I ended up ordering both rather than wait another moment without sustenance.

The Prime Rib in the hash was tender and well seasoned and I also enjoyed the onions and mushrooms that came with it. Between the massive serving of fried potatoes and the even larger portion of French toast, I found myself a little overwhelmed. The French toast managed to be as divine as it sounded with its warm fluffy filling and daintily caramelized coating. It also came with two fried eggs!

Plate of Love – Prime Rib Hash with Creme Brûlée French Toast. There is love involved in both its creation and consumption!

Before my next course arrived, my waitress informed me that the chefs knew that I was extra hungry and that they wanted me to sample an extra two courses: The New England Clam Chowder (definitely comparable to anything I’ve had East) and the Cinnamon Roll Pancakes (which were totally sweet in every sense of the word). My heart and stomach were both touched by this extremely generous and random display of kindness. They didn’t even know I have a food blog!

The Chicken Fried Filet Mignon was definitely my favorite thing on the menu. Breaded and battered like a well-loved schnitzel or, then slathered in the thick, savory house sausage gravy, it thrilled my tastebuds from start to finish. Its crunchy, crumbed exoskeleton could easily have passed for the perfect morsel of fried chicken and the steak within was juicy and medium rare with a lovely, yet faint sweetness in the meat that made the entire dish and its savory charms stand out even more. It also came with another two fried eggs, a buttermilk biscuit (came with a dollop of homemade strawberry jam), and a fresh fruit salad that included blueberries, mango, pineapple, and a ruby red slice of ripe blood orange.

Did I mention that every entree here went for under $15? Recall how they don’t do sales tax here in Oregon.

I was so charmed by that first extravagant meal, I made sure to visit Word of Mouth again during my four day stay in order to try The Incredibly Flying Biscuit with its buttermilk fried chicken. The Saturday rush was really crazy, so I got it for take out, and I was impressed again,

If you’re in Salem for any period of time, I wholeheartedly recommend that you try Word of Mouth Bistro. It can get busy and crowded for breakfast and lunch, but the crazy success is a testament to just how special a place Becky and Steve are running here. You’ve certainly won over this fussy New Yorker!

Hours: Open Wednesday-Monday for breakfast and lunch from 7:00 AM to 3:00 PM. Closed Tuesdays. 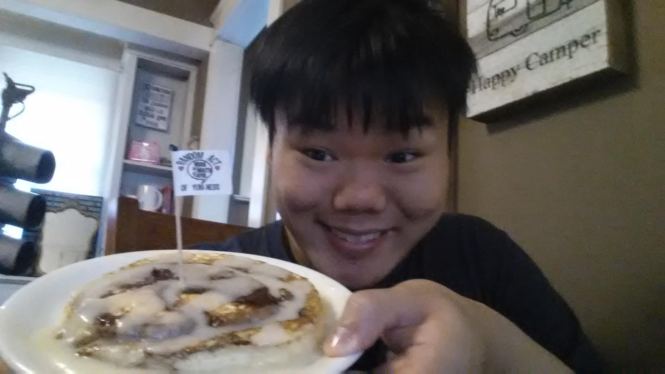 Just read the sign behind me if my smile isn’t convincing!