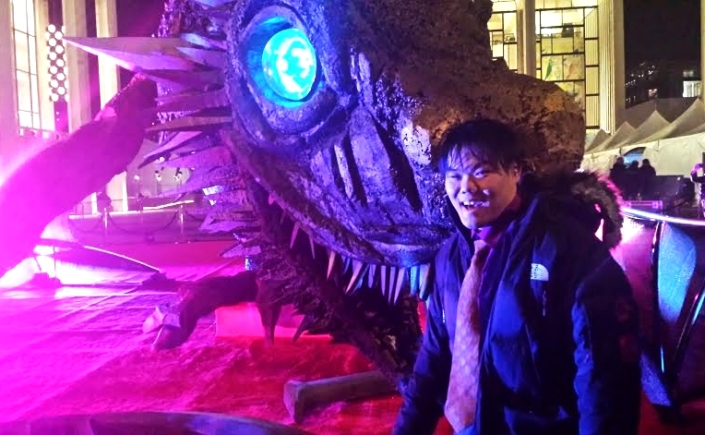 This writer, foodie, and long-time fantasy geek got the extraordinary opportunity to join the cast and crew of the HBO Original Series, Game of Thrones, for Season 4’s grand premiere screening and swanky after party. The Red Carpet was rolled out at Lincoln Center and a specially designed statue of Queen Daenerys’ pet dragon, Drogon, greeted guests with a toothy grin, as did I.

At Avery Fisher Hall, some of the fabulous string musicians of the New York Philharmonic performed moving renditions of the show’s opening theme along with other fan-favorites like “The Rains of Castamere” and “Mhysa” with Ramin Djawadi, the show’s composer, conducting his own masterpieces. Lucky enough to sit in the second row, the epic music wafted into my ears—each string onstage feeling like one within my own heart. I must admit, when the title credits started rolling, it saddened me that the Philharmonic’s version can’t be the main one. It was THAT awesome! At the start of the ceremonies, Charles Dance (Tywin Lannister) graced us with a stern warning (really some threats) about the dire consequences of leaving one’s cellphone on or recording the show. Before the screening began, show runners David Benioff and Dan Weiss as well as HBO Programming President Michael Lombardo left us with some triumphant speeches. 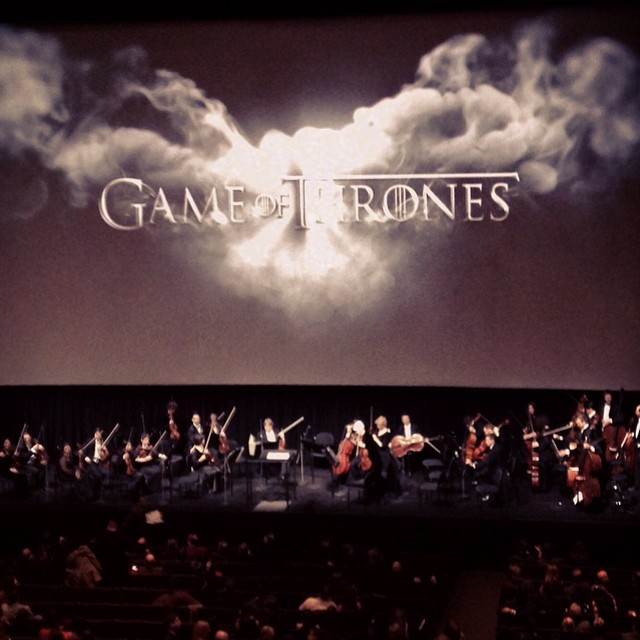 The Cello solos really stood out!

Food of Thrones: Inside the Episode and Its Characters’ Stomachs

While I was thrilled to get a sneak peek of Season 4’s first episode, I won’t be going out of my way to spoil anything too specific about the episode’s plot. However, as this is a food blog, I will be happy to divulge what the main characters ate, and there was actually quite a bit of feasting going on in Westeros. Daenerys Targaryen (Emilia Clarke) watched her sweet dragons flambé an unlucky goat with fresh pepper breath. Sansa Stark (Sophie Turner) had trouble eating pigeon pie and lemon cakes after receiving some troubling news about her family. Cersei Lannister (Lena Headey) continued to drink red wine excessively while bossing people around. The Wilding Ygritte (Rose Leslie) and her crew watched some bloodthirsty tribesmen eat some of their enemies while thinking of better fare. Arya Stark (Maisie Williams) and the Hound (Rory McAnn) resorted to desperate measures for some delicious roast chicken. It’s a yummy start to what Michael Lombardo promises is the best season of [one of] the greatest show[s] on television!

Everybody has those days… You know it’s bad if Sansa won’t even touch the lemon cakes–they’re her FAVORITE!

I found it borderline impossible to engage with the actors on the Red Carpet or at the premiere itself as they were preoccupied with the paparazzi, but the cast party sang a different song as I had the opportunity to wine and dine with several of the stars—really got the royal treatment! Held in the Hall of Biodiversity and Milstein Hall of Ocean Life at the American Museum of Natural History Uptown, the Season 4 Cast Party featured animated flames all across the walls and over the exhibit’s signature fiberglass whale—that’s right, we were greeted with something as outlandish and mythical as a flaming whale!

For us smallfolk, there were opportunities for some virtual reality games based on the show, costume exhibits, and a photo on the Iron Throne, but I think I had a much better time trying the delicious party food and mingling with the cast and crew!

Better than a royal wedding! And less violent 🙂

Of the positively kingly buffet offerings, I most fondly remember the fillet of beef, arctic char in miso glaze, and gnocchi in crimini and shiitake mushroom cream sauce. There was also a kingdom of appetizers, including tuna tartare, minced chicken with peanut sauce, and asparagus wrapped in pancetta, as well as an open bar with some show-inspired cocktails—I heard The White Walker was to die for! 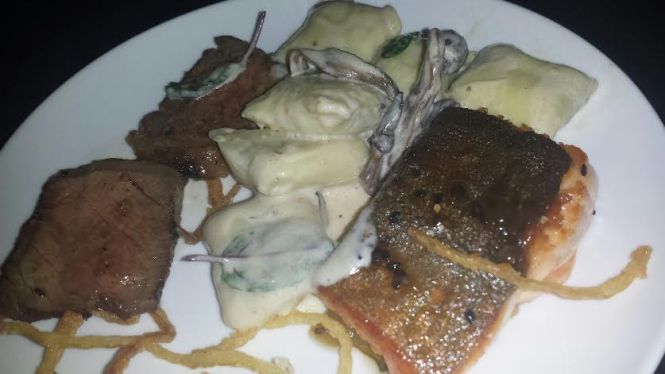 Fillet of Beef, Gnocchi with Mushrooms in a Cream Sauce, Arctic Char Marinated in Miso

For dessert, we were offered an assortment of cupcakes, pastries, cookies, and other treats, but I settled for the tasty blueberry almond tart a la mode.

FOOD FOR OTT AND THE STARS 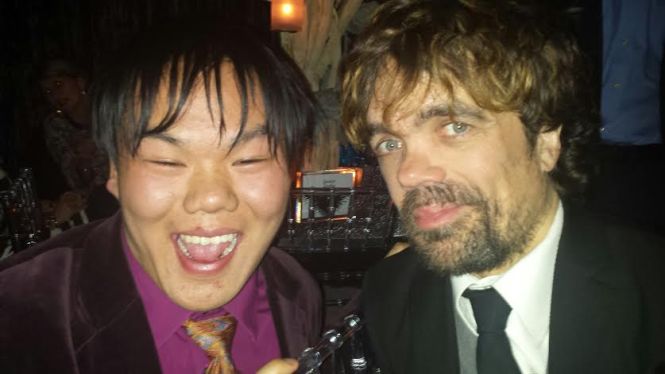 I met the incredible author of the books that inspired the series, George R.R. Martin. When I asked him for tips on combating writer’s block, he reached for his wine glass… CLASSIC! 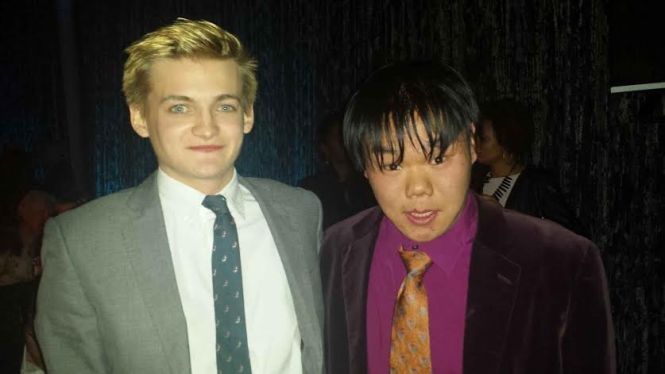 King Joffrey Baratheon (Jack Gleeson) showed me mercy and even allowed me a picture. He has no immediate plans to annex Manhattan to the Seven Kingdoms. 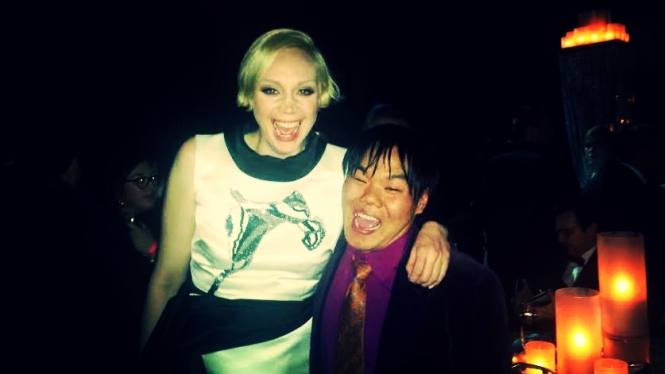 Brienne of Tarth (Gwendoline Christie) agreed to a photo as long as I promised to scream with her. It was a long, good scream–made me feel like a warrior!

Sansa Stark (Sophie Wright) was kind enough to take this photo of me with Ser Loras Tyrell (Finn Jones). I kid you not when I say she declared us “SEXY!” Ser Loras was sipping an appropriately House Tyrell-Green party drink!

I told Theon Greyjoy (Alfie Allen) that he looks quite dapper in a suit and when he’s not tied up or being tortured! 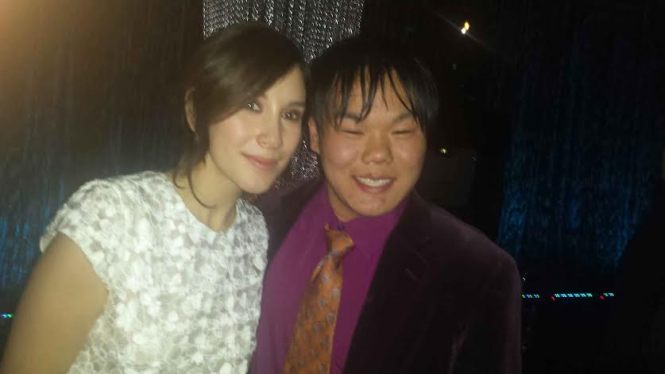 The Wilding Ygritte (Rose Leslie) looking especially demure out of fur and boots.

I asked Roose Bolton (Michael McElhatton) to do something menacing for the camera, but he told me “I don’t take direction from boys… Remember what happened to the King in the North?” Plenty menacing 🙂

Missandei (Nathaile Emmanuel) is happy to play an intelligent woman of color in a medieval fantasy drama. 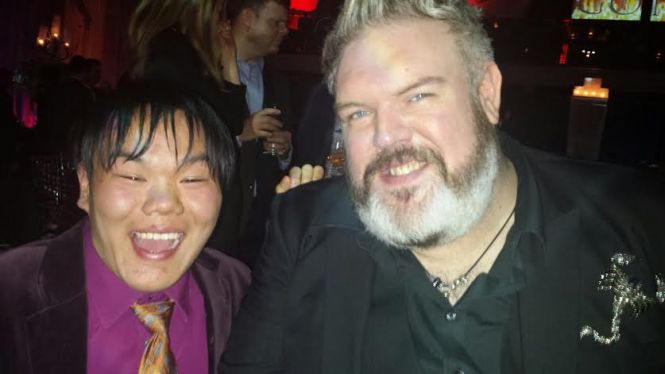 The festivities went on until midnight. It was honestly one of the greatest experiences of my young life. These characters, experiences, and tastes will stay with me for a very long time. 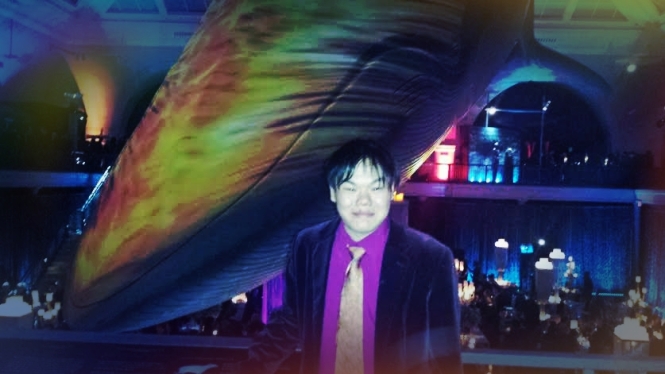 If my name wasn’t Otter, I’d totally take this flaming whale for my House Sigil!

Food For Ott would like to thank the good folks at The New York Philharmonic for this exclusive invitation, the cast and crew of HBO’s Game of Thrones for being sweet and humoring a fan, and the HBO staff for hosting the perfect night.Game of Thrones comes back to HBO on Sunday, April 6th, 2014 with Season 4 playing for network subscribers at 9 PM.